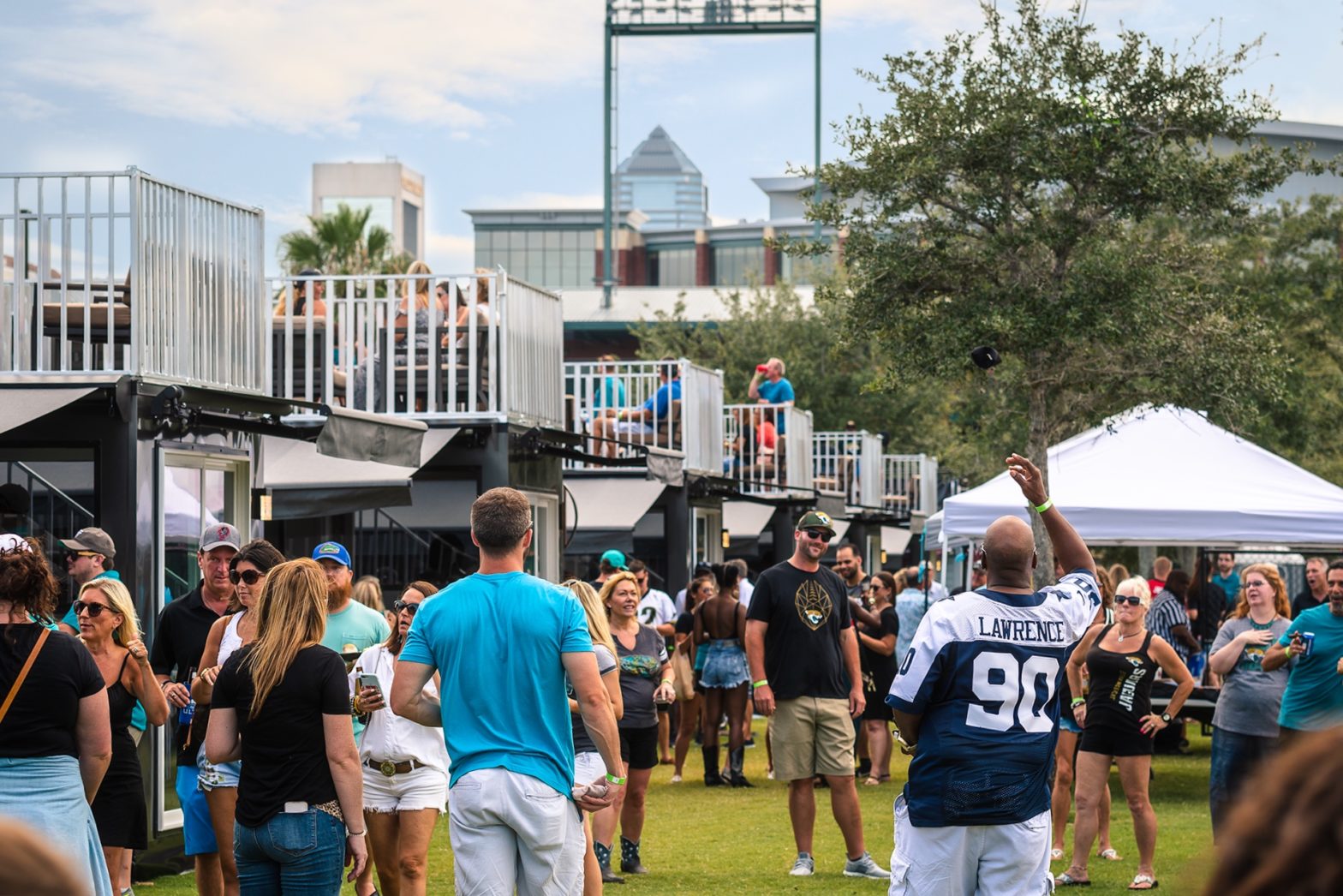 What a difference a year made for Party Shack USA.

During the 2017-18 NFL season, Jacksonville-based Party Shack USA set up a climate-controlled, all-inclusive and portable entertainment suite near the west entrance of TIAA Bank Field.

“It was a head-turner for sure,” said Party Shack Managing Partner Bobby Bowers. “When you pass by, you’re immediately interested in what it is and why it’s there.”

This year, the company created a Party Shack Tailgate Village of nine suites in a fenced-off section of grass behind the Jacksonville Veterans Memorial Wall.

Bowers said the village will debut Saturday night for the Jacksonville Jaguars preseason game against the Atlanta Falcons.

“This weekend will be more like a trial period for those who may be skeptical of the concept or haven’t seen it before,” he said.

The village will remain for the Jaguars season and for fans attending the Florida-Georgia game in October.

“The Jaguars allowed us to be on property last season, to activate and assume the risk, and show them our proof of concept,” Bowers said.

Jaguars President Mark Lamping said the company made a good impression in 2017, leading to an expanded agreement.

The 5,500-pound units are 17 feet long, 8 feet, 6 inches wide and 8 feet, 6 inches tall.
“They have a great layout, a great product,” Lamping said. “They have experience in this area and we think they’re going to be a great addition to the tailgating atmosphere.”

Lamping said the partnership is an example of the team trying to offer fans something different, “especially if they’re coming to TIAA Bank Field for the first time.”

“All we’re trying to do is make sure we offer to our fans every possible option that will enhance their enjoyment of going to Jaguars football game,” Lamping said.

He said some fans tailgate from the trunks of their cars while others want “premium experiences.”

Bowers said the prototype featured near Parking Lot J last season proved to the Jaguars and others that the concept was marketable.

“People are starting to realize that a tent isn’t the only tailgating or VIP hospitality option for them,” Bowers said. “We’ve opened a new channel for individuals or corporate hosts to entertain guest on a premium scale,” he said.

He said the patents are for the unit’s designs and other aspects of the company’s business model.

Six units are set aside for private groups and two are for fans to purchase as individuals. Bowers said the ninth unit is on site for the company, but could be rented out if demand is high enough.

The company had only one shack set up during the 2017-18 season.

Bowers declined to offer pricing for multiple game packages for private groups since those rates depend on group size, length of commitment and other factors. He said interested parties can inquire at partyshackusa.com

Fans can purchase individual access for single games for $149.99. Tickets for the preseason Falcons game are on sale for $64.95. Tickets are all-inclusive and include beer, wine and food catered by Bono’s Pit Bar-B-Q.

Bowers said some elements were redesigned based on feedback and performance.

The suites are climate-controlled and feature 4K televisions, refrigerators, premium seating, smartphone charging stations and other amenities. They can accommodate up to 40 guests.

The units have retractable awnings and rooftop seating.

Party Shack brought its concept to Jaguar games last season and is expanding with Tailgate Village.
The company now manufactures the suites in Georgia and finishes them at their Jacksonville warehouse rather than China. Bowers said the switch was made to enhance the quality of the product and speed up construction. More importantly, he said they were able to do so without drastic cost increases.

“Logistics is the biggest challenge for this type of product and we think we offer the best solution to that,” Bowers said.

Party Shack handles delivery, setup, maintenance and pickup for those interested in renting them for an event.

When not in use, Bowers said they store the units in Jacksonville.

Bowers sees the concept evolving to serve corporate sponsors and brands that want to entertain guests or showcase products during other events.

“This product can be made to accommodate more than just something you experience during a football game,” he said.

“We’re doing a case study through the NFL and NASCAR regarding proof of concept, how well it works in their systems, and what different types of activation this can be used for,” he said.

While Tailgaters Village is centralized, the company also plans to deliver Party Shacks to groups who want to tailgate elsewhere.

Bowers said next year the company hopes to design another village on the east side of the stadium.

Bowers said he believes the concept should take off.

“The possibilities are endless.”

Original Article Can Be Found on Jacksonville Daily Record.